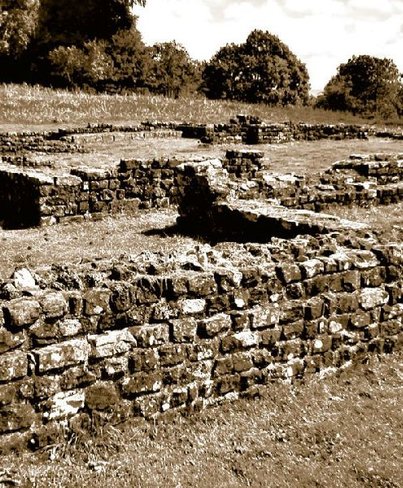 - IN THE FOREST OF DEAN

Tuesdays, Wednesdays, and Thursdays, between

Please checking the Lydney Park Estate website, Facebook or Instagram pages  for any further updates with regards to opening days and times, in the case that guidance will need to change.

Located on the southern edge of The Forest of Dean with views of The River Severn, the Romano-British temple at Lydney was excavated by archaeologist Sir Mortimer Wheeler in 1928-9.

The temple occupies part of an iron age fortified hill, nearby is another hill crowned by the broken walls of a medieval castle.

The temple was occupied in the late Roman period, and is unusual in that it operated as a pagan site at a time when the official religion of Rome was Christianity. A recent reevaluation of the site suggests that it was a popular place for pilgrimage as early as the second century.

The site for the temple may have been chosen as it offered a clear view of the Severn Bore. The mosaic floor of the temple included images of dolphins, fish, and sea monsters.

It is possible that the temple is orientated towards the sunrise of the winter solstice.

The temple was dedicated to the gods Nuada (Nodens), and Silvanus. Nodens was equivalent to the Welsh Nudd, and Lludd Llaw Eraint (Lludd of the Silver Hand). Lludd’s name survives in the place name of Lydney.

Many votive offerings have been discovered, indicating not  only the sites popularity, but that it was an important centre for healing. Nine small images of dogs were found, some resembling greyhounds, which may have been associated with the god Silvanus, the leaf-crowned Roman god of woodlands.

The buildings of the temple complex comprise of three main elements beside the temple. The largest building is believed to have been a guest house for visitors; next to that stood a bath house (fed by water from a cistern, the remains of which are visible a little to the north). The third (long) building is thought to have been a Aesculepia, a dormitory where pilgrims would receive healing while they dreamed of the temple gods.

Many of the finds from the excavations are on display in the small museum in Lydney Park House.

J.R.R. Tolkien visited the Lydney Temple to assist with work interpreting the many inscribed tablets found in the excavation. He was fascinated by what he discovered here, spending much of his spare time exploring the landscape, and delving into its rich folklore.

One of the tablets he worked on calls upon the gods of the temple to assist in the returning of a stolen ring.

The hill on which the temple stands was known to the Anglo- Saxons as Dwarf’s Hill, the name used throught the excavation report. The ancient Roman iron mines beneath it (said to extend far out, deep beneath the Forest of Dean) were believed to have been originally dug by dwarves. Local tradition spoke of them abandoning the mines and ruins above to fearsome goblins - it was a place to be shunned after dark.

Much of what Tolkien saw and heard here may have influenced his later writings -The Hobbit and The Lord of the Rings.

The nearby “scowles”, areas of rough rock-strewn passageways, mossy and overgrown with twisted trees look like the forests of Middle Earth described in his books.

Download a free leaflet giving a brief introduction to the Lydney Romano-British Temple, along with a map showing its location. 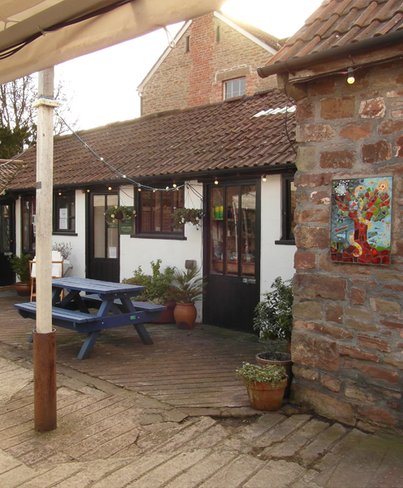 IN THE FOREST OF DEAN

We are at Tuarus Crafts on the A48, the old Roman road that runs from Gloucester to Chepstow. Located in the Forest of Dean overlooking the River Severn, there are lots of local Forest attractions nearby.

All copyright, design rights and intellectual property rights existing in our designs and products and in the images, texts and design of our website/marketing material are and will remain the property of Green Man Gatekeeper / Clive Barrett.
We will treat any infringement of these rights seriously.